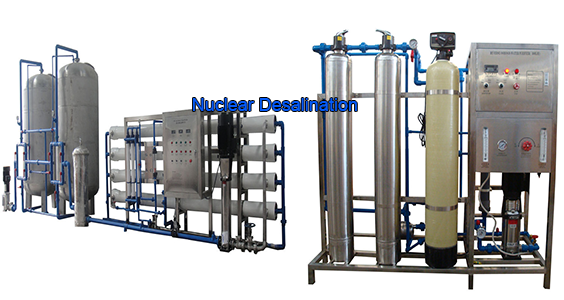 Availability of fresh water has always been a challenge to many countries. Several techniques have been put to practice in order to obtain fresh water for different purposes. One of them is nuclear desalination. Nuclear desalination is a process in which the minerals components in water are taken away from saline water by evaporation, using the heat produced by the nuclear power plants. The water is then condensed and is utilized. The water produced by this process is used for irrigation and regular human needs. Although it is relatively costly to purify water this way, other techniques of water purification are not always readily available. Due to geographical limitations, places like Israel have struggled to get access to fresh water over the ages. This technique can help in providing the required fresh water supply. Countries like India, Japan, and Kazakhstan have been using nuclear desalination methods over the years. Approximately 1% of the entire world used nuclear desalination process to purify water.

Unlike fossil fuels, nuclear plants do not emit harmful substances. This way, environmental pollution and greenhouse effect, caused by the emission of greenhouse gases from fossil fuels usage can be controlled. It is the most promising method of water desalination and is practiced in many countries. The groundwater and wastewater can be desalinized and used for irrigation and drinking purpose.

Although water desalination by nuclear power plants is promising and widely used, there are always risks of the radioactive materials from the nuclear plant leaking directly into the water, in spite of all the safety measures. Also, this is a costly process. In a few cases, water desalination might result in removing iodine from water. This might lead to iodine deficiency in people. Because of its layout, it might be risky, as the pipelines laid in the ground have a possibility of leakage and contaminates the nearby aquifers. It is not a permanent solution to depend on for decades. The brine produced at the end contains residues of cleaning chemicals and byproducts. As it is denser than seawater, it sinks and settles at the bottom of the ocean and damages the ecosystem of the ocean. Hence, the brine should be diluted with a stream of water.

Other Different Methods of Water Desalination

The desalination takes place in a series of flash evaporations. The energy released from the condensation of water vapor in each step is utilized in the next step.

This method uses a temperature difference to evaporate vapor across a membrane from salty water and condense on to the cool side.

In this method, the vapor present above the liquid is compressed by a jet stream or mechanical compressor. This vapor provides the heat required for the evaporation of the rest of the water. It is a cost-effective method.

This method involves freezing of fresh water. When the salt water is sprayed in freezing condition, it forms an ice pile in the pad. In warm conditions, this ice pile turns into desalinated water.

The reverse osmosis process used applied pressure and semipermeable membranes. When salt water is under pressure on these membranes, the water passes through them, leaving behind the salts.

This method uses a pair of charged membranes to trap the salts present in the water, thereby desalinizing the water.